Little did Fred Crocker realise way back in the 1940s that his design of a new craft would lead to the development of a multi-million rand ski boating industry and the formation of a unique angling club that now proudly boasts of being the only one of its type in the world – the Durban Paddle Ski Club. 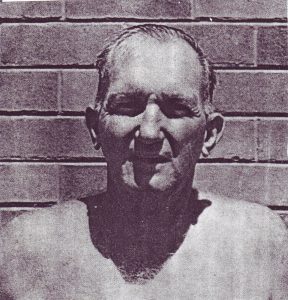 In 1938 Alex Bulley, a fellow surfer, brought back a book and some ideas on surf skis he had seen in Australia while attending the Empire Games.  Upon returning home to civilian life after the 2nd World War, Fred Crocker wasted no time in designing and building his famous “Crocker Ski.”  This craft was a peculiar, flat-bottomed, banana-shaped contraption, being supported by a meranti beam frame, covered in canvas and coated with an epoxy paint to make it watertight.  It was originally designed as a surf ski, but before not too long, several youngsters were seen fishing from this type of craft off the beachfront. 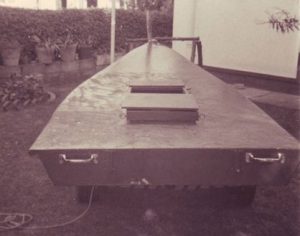 In the mid 1940s, an angler named Hayden Grey, improved the design of the “Crocker Ski” and built a craft that became the first “ski boat” to be launched in South Africa.  This new motorised mode of fishing began to produce impressive catches and thus attracting many anglers, while others persevered with the original Crocker Ski.  Amongst these, were Alby Upton, Tiger Aston, Marcel Coulon, Owen Harmsworth, Len Rodgers, Graham Hynes and the Schmidt brothers – Fred, Tommy and the legendary “Lefty”.  Fred was to attain fame later in the early 1950s by pioneering the famous “Dusi” canoe race with Ian Player.  Since those early days many more anglers utilised these craft off the Durban beachfront but nothing concrete materialised from their activities.  Alby Upton however, soon gained fame for his daring and hair-raising trips into the night on his canvas floating machine, taking baits out for shark fishermen and being guided back to shore by torchlight!

It was only in the late 1960s that paddle ski fishing began to make a permanent impact.  A young Durban Corporation apprentice named Ross Hichens purchased a second hand Crocker Ski and began making spectacular catches off the Durban beachfront. 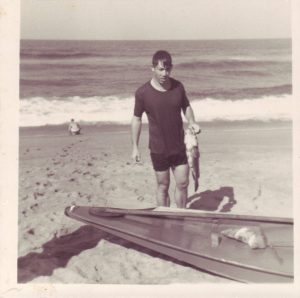 In the angling world good news travels fast and soon, many new faces appeared on the scene.  Amongst these were Greg Glazer, Tim Driman, Alex and Kevin Simoni, The Mulroy twins, Wally Watt, Tommy Flanders, Clive Holmes, Bruce Peats, Peter Greenaway and Alan Cerff.  Most of the launches took place between Vetch’s Pier and the North Pier and when conditions would permit, between Vetch’s Pier and the old wooden sand pump jetty.  This stretch of beach, then known as “Pirates Beach”, is today known as uShaka Beach.  To launch a ski one had to first carry it down a high, steep sand dune, which was littered with broken bottles and other rubble and then, at the end of a day’s fishing, repeat this backbreaking feat with a hatch full of fish as well! 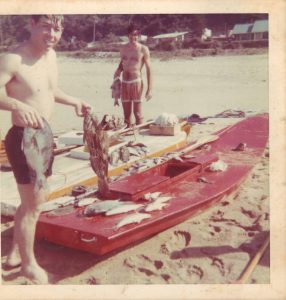 These anglers soon spread their wings and began operating up and down the coast even             venturing out as far as Aliwal Shoal!  None of them bothered to carry any safety equipment         and many were also fishing at night. Within a few years the sport had grown phenomenally         and some form of law and order had to be restored.  On the instructions of the Port Captain         the Durban Paddle Ski Club was formed in 1971 with Tim Driman being voted as the first      chairman.  Later on, a section of land next to the North Pier was leased to the club by the Port     Captain, and the members took it upon themselves to design and construct a clubhouse.        These facilities obviously attracted more members and until today, this club has maintained a     membership of between 300 and 400. 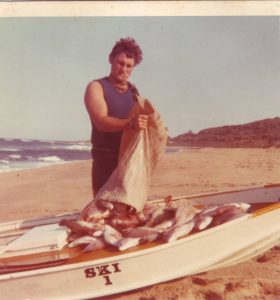 Although several “luxuries” such as hatches, rod holders, skegs and transoms have been added over the years, the original shape of the Crocker Ski has hardly changed to this date.  After a nasty but comical incident, where Hichen’s ski was sliced open by a dolphin’s dorsal fin, canvas soon gave way to masonite then marine ply and finally to maintenance-free fibreglass. Over the years, paddle skiers not only became accomplished anglers but craftsmen as well with many designing and constructing their own skis.  Dennis Glazer became possibly the most capable with many of his skis used by club members to this date.  His popularity was also due to the fact that his skis (now called Glazer Ski) had many well-concealed “secret hatches!” 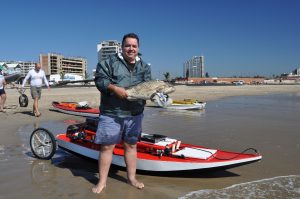 Today, safety is a major concern and life jackets, flares and 1st aid kits are carried, with anchors and fitted capsize ropes also being mandatory. Each member is required to do a duty approximately every 16 months and these measures have resulted in the 100% safety record throughout the club’s history.

The introduction of the “long skis/kayaks” during the mid 1990s, revolutionized paddle ski angling. The speed these craft can reach enabled anglers to launch and beach their craft through the surf off most beaches and were no more confined to only operating from recognized sheltered launch sites. It also provided access to the open sea without the use of expensive motorized craft. Today hundreds of “long skis” can be seen operating along the entire coast of South Africa, and boating large pelagic fish, such as king mackerel, tuna, wahoo, sailfish and other various types of billfish which until now were only accessible to ski boaters. This was a shot-in-the-arm for the club as many more anglers took to this mode of fishing and today the vast majority of members operate off long skis. This industry has shown phenomenal growth attracting dozens of extremely competent manufacturers, who are forever redesigning, improving and producing many exceptional craft. 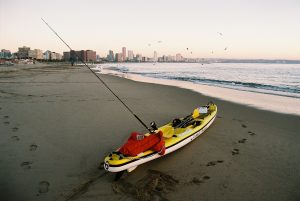 For years the operational area was between the North Pier and the old Snake Park Pier, but today if launching from the club, members may operate between the Cave Rock area off the Bluff beaches (approximately 3 kms from the South Pier), to the Umgeni River, and can venture out one kilometre seawards of the tip of the South Pier.

The future of the club had been somewhat uncertain between 2003 and 2013, due to the proposed small craft harbour on the Point. After refusing to sign an agreement, which would have seen the entire beach smothered in concrete with a 5½ metre seawall and a 24-storey hotel built into the sea a stone’s throw from Vetch’s Pier, the developers attempted to evict the Durban Paddle Ski Club, while the other boating clubs, succumbed to the threats of evictions, and signed. The view the club took was that the ravages of heavy construction over the projected 15-year period, would have had a catastrophic effect on all marine life in the area, particularly of that on Vetch’s Pier, upon which our sport so heavily depends. Membership would have also been seriously affected. In simple terms, it would have been pointless having a fishing club in an area where there would be no fish. All the money in the world would have meant nothing, if we had no beach!

They wanted to turn this… 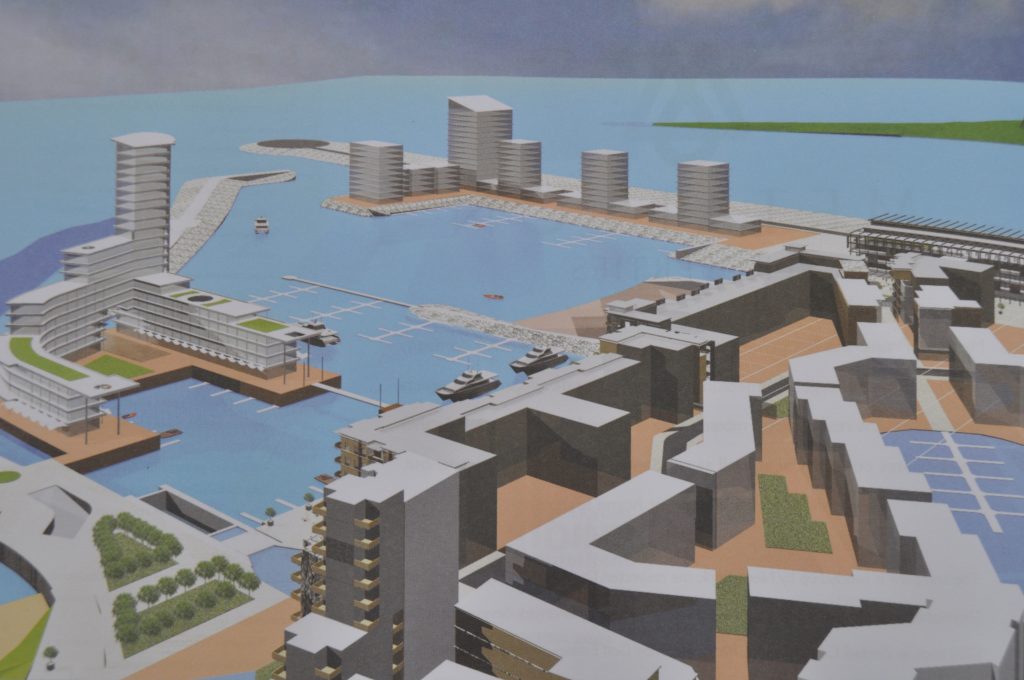 All the boating clubs on Vetch’s Beach were also required to consolidate under one umbrella body and operate under one roof. The clubs were to raise approximately R20 million to construct and then operate such a clubhouse, which would have also been rated by the municipality and levied by the developers. In our opinion, this would have taken membership out of the reach of the average citizen, making it affordable only to the elite. For us, signing the agreement would have lead to financial suicide and we had no doubt that the evictions were nothing more than punitive and vindictive measures for the club daring to oppose the small craft harbour.

Realizing, we could not go it alone, the club was instrumental in forming and funding a public body to legally challenge the approval of the small craft harbour. This body was called The Save Vetch’s Association (SVA). After a long and bitter legal wrangle against huge odds, an agreement was reached between the club, SVA and the developers, in which a much scaled down marina could go ahead and the club be reasonably accommodated along with all the other boating clubs. This was indeed a huge accomplishment for this little club. Recent developments indicate that no small craft harbour will be built, which means that Vetch’s Pier and Beach will remain intact, while it appears that we shall be accommodated right on the beach beneath  the promenade which will be extended from uShaka to the base of the North Pier. And that my friend, is all we ever wanted.

Yes, we did spend all our money saving this beach and we were criticised and even mocked by certain people for taking this ‘extremely costly’ stance. Our question to our critics was ‘how costly would it had been, had we not taken this stance and allowed for the total destruction of the beach and reef?’ We believe it was worth every cent and would do it all over again if we had to. We are proud to state that had it not been for the action taken by the Durban Paddle Ski Club, the Save Vetch’s Association, the legal team that stood by us throughout this uphill battle, and nobody else, today there would be no beach or reef for the people of Durban and particularly, the members of the other boating clubs on Vetch’s Beach, to enjoy. Saving this little piece of paradise, is our humble gift to the wonderful people of Durban…You’re welcome! 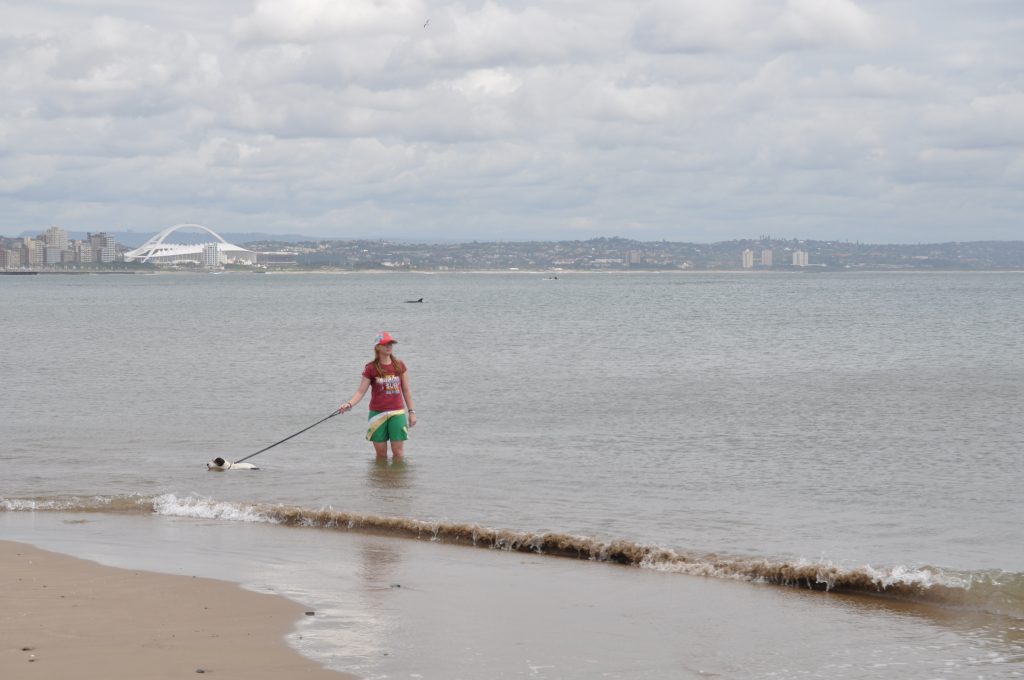