FISHING & BRAAI. Join us on Sunday 23rd September at #PlaceintheSUN for both. Launch from 5am Scales close 12.30pm Braai around this time till late. Prize giving around the braai & weigh- in area….Alan G on mike as usual. Bundu on the scales. Prizes for LADIES. Come along and have a jol with your mates R150 fish & braai Or R100 fish only Or R60 baai packs available. .advise numbers for catering purposes. Fish responsibly – #eatwhatyoucatch Drive home even more responsibly #dontdrinkdrive. Please put the word out. I will have prizes for the Pski guys but there has to be a minimum entry of 15 anglers. They will fish against each other
And could win overall. 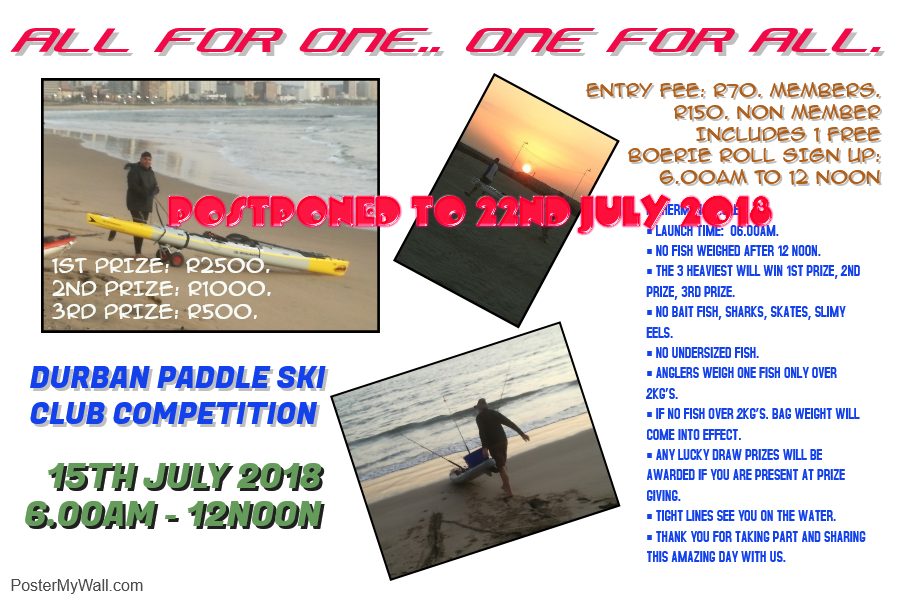 During November 2011 Durban was the host city of the annual COP 17 summit. This is a massive event where all the environmental experts of the world congregate to discuss various environmental and climate-change issues that concern our planet. Having successfully hosted the FIFA World Cup the year before, our politicians were eager to impress the world once again by showing them we were world leaders in climate-change policies and were really looking after our environment.

Durban Metro coastal engineer, Dr Alan Mather, had done an in-depth study of the projected rise in sea-level for our city. He established “The Blue Line” which ran way behind all the hotels on Durban’s Golden Mile and represented the projected a new high-water mark, that would result from a one metre increase in sea-level as a result of climate change. Our government along with our municipality arranged a march along this “Blue Line” during the COP17 conference, to highlight the effects of climate-change advising developers not to develop close to the shore and to retreat to this line. The route was intended to show which part of Durban’s Golden Mile would be submerged when the sea-level rose in the coming decades.

The march was scheduled to start at uShaka Beach and proceed northwards for 2.8 km to the beach pavilion site, where the politicos were to address the crowds and make themselves look clever in front of all the dignitaries and foreign delegates. We wrote to the deputy president, the minister of environmental affairs, the Mayor of Durban and the premier of KwaZulu Natal, suggesting the march should include Vetch’s Beach, where they were ignoring their own advice and were planning to go into the opposite direction building their small craft harbour way into the sea. As expected, no one bothered to reply. So we, along with the Save Vetch’s Association decided to join them.

We gathered at the paddle ski club and, armed with our banners, stickers, pamphlets, and a sea-level chart, and dressed in our famous yellow and blue “Save Vetch’s Beach” T-shirts, we made our way to the starting line, gathering supporters along the way like the Pied Piper. When we arrived at uShaka we were joined by hundreds of more supporters and made quite a stir. The deputy president became concerned and asked us if we were coming to protest against the march, but we told him that we were coming to support him in raising awareness of the threat of sea-level rise on Vetch’s Beach. I don’t think he realized we were actually coming to ridicule this hypocritical event, or even knew where the hell Vetch’s Beach was.

Along the march our supporters did a great job spreading the message regarding the proposed small craft harbour that was going to destroy Vetch’s Beach, distributing hundreds of pamphlets and stickers amongst the many foreign and local delegates and climate-change activists that attended. We stuck our stickers on every pole, wall, car, and on everyone we came across. One bloke even put a “Save Vetch’s” sticker on the car bumper of one of our government officials who was too lazy to walk with the rest of us, and chose to be chauffeur driven along the whole route instead! A real committed enviro-worrior! Many of our supporters were also interviewed along the way by the local and overseas press making it on the evening TV news that night and the daily newspapers. One reporter congratulated our chairman, Johnny Vassilaros, for managing for the first time, to get white people to march. Johnny told him that it was also the first march in the history of this country where nobody died.

Basically, we did a great job exposing the hypocrisy of our government and municipal officials, while at the same time raising awareness to our cause of saving Vetch’s Beach.

Enough said…The pictures will tell the rest of the story.